“Slovenia has always had good relations with Russia; however, during the government of Janez Janša, we experienced a shift towards the United States of America and distancing from Russia – at least externally,” is what Marta Kos, the Vice-President of the newest left-wing party, the Freedom Movement (Gibanje svoboda), told the media outlet Žurnal24 a few months ago, while also emphasising that it is in the party’s interest to have normal relations with Russia. It is a well-known fact that the Ljubljana Mayor Zoran Janković is a supporter of Russia and does not want to return the decoration he proudly received from dictator Vladimir Putin, so it is not surprising that Robert Golob is following in his footsteps. In 2014, the latter already regretted that Slovenia had not been assigned the energy department in the European Commission, as he hoped that Slovenia, with its pro-Russian orientation, would have been able to establish friendly relations between the European Union and Russia.

There are more and more indications which show that Robert Golob‘s party, which won the parliamentary elections on Sunday, is strongly pro-Russian, which means that we will get a new pro-Russian government. A few days ago, we already warned that the candidate for the position of MP from the Freedom Movement, Miroslav Gregorič, shared scandalous tweets on Twitter, where he expressed doubt about the fact that the Russian massacres in Bucha actually happened and did not even try to hide his support for Vladimir Putin‘s invasion. “The messages make sense with the recent information about Russian involvement in the Slovenian elections,” we pointed out. And now we can also confirm that the former expert for international nuclear safety was also elected as a Member of Parliament. 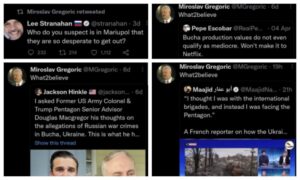 Let us remind you that, in addition to the International Center Democratic Party IDC-CDI, the European People’s Party has also expressed concern in regard to these statements. The European People’s Party wrote that Slovenia expressed its unconditional support for Ukraine and was one of the first countries to condemn the barbaric Russian war in Ukraine – which is why Russia might be interested in interfering in the elections. In addition, another important fact has come to light, namely, that retirees were driven en masse to the polls on Sunday, at the initiative of the leftist non-governmental organisation Institute of the 8th of March (Inštitut 8. marec) and Dejan Jefim – who once worked for a Russian multinational company which also passed on information to Russian intelligence. Marta Kos did not hide her support for the Russian side either, as she did not think it was right to help Ukraine with armaments, and also complained about the fact that Janez Janša did not also visit Moscow, in addition to Kyiv. “In the future, we will also have to talk to Russia, as there will be no European security or a new security structure without Russia,” said the Vice-President of the Freedom Movement, who emphasised that it is in the party’s interest to establish normal relations with Russia.

As already mentioned, Golob said in an interview in 2014 that he regrets that Slovenia had not been assigned the energy department in the European Commission, as he hoped that Slovenia, with its pro-Russian orientation, would have been able to establish friendly relations between the European Union and Russia. “We are actually not even really aware of how many opportunities Slovenia has lost. The Vice-President of the European Commission for the sector of Energy will be the person who will have a key influence on the regulation of relations between the European Union and Russia in the coming years,” he said, explaining that this is the reason why this position is strategically very interesting. “And not in relation to individual names, but in relation to two blocs of the EU member states. In the end, the anti-Russian bloc won, and we were the collateral damage of it,” the electricity oligarch also said, who, at the time, was still claiming that he did not want to become the prime minister. The media outlet Demokracija wrote that Golob therefore regretted that the composition of the European Commission was not pro-Russian.

Regarding what was happening in Ukraine at the time – we are, of course, referring to the violent actions of Russian separatists – Golob said that the Russians followed a similar logic as the Serbians had in the former Yugoslavia: the logic of protecting the territory where Russians live: “Westerners, especially Americans, are looking at geostrategic interests.” According to Demokracija, he even singled out the current President of the United States, then Vice-President Joseph Biden, and his son, who worked in Ukraine at the time. Hunter Biden is a very important excuse that Putin likes to use to defend his attack on Ukraine, saying that Biden Jr was involved in the production of biological weapons in Ukraine. However, the current views of Golob and the Freedom Movement party are also in favour of Russia and the Putin regime.