“It is, however, worrying that AKOS, as a state body that is part of the executive branch of government, has taken on the role of prosecutor and judge and ordered the media outlet to withdraw part of a private TV programme. Let’s call it what it is: a typical example of censorship,” wrote Jože Biščak, President of the Slovenian Association of Patriotic Journalists and a journalist at Demokracija, and Vinko Vasle, columnist, writer and former director of Radio Slovenia, in a letter to the European Commission’s Vice President and Commissioner for Values, Vera Jourova.

We are publishing their letter – which refers to the AKOS decision against Nova24TV and the destruction of the property of a private broadcaster – in full.

“Dear Věra Jourová, Vice-President of the European Commission and Commissioner for Values

During the centre-right government of Janez Janša, you were very concerned about media freedom in Slovenia. Hardly a month went by when you did not speak out and stress how important media freedom is for democracies and how important it is to protect journalists and the media. Since you are apparently still very selectively informed about media developments in Slovenia under the new, left-wing government of Robert Golob, we somehow feel obliged to inform you.

On Friday, 4 November, the media published the news that the Agency for Communications Networks and Services of the Republic of Slovenia (AKOS) had ordered the media company Nova24TV to withdraw part of the “Who Lies to You” programme. The reason is “incitement to violence and hatred against a group of persons or a member of such a group on the grounds of belief, political or other opinion”. It is about the part of the contact programme when an unnamed viewer called in and said, “The battle for Slovenia will now be repeated /…/. Those of you who have weapons at home, do not hand them over to the police. Those of us who don’t have them, we will get them to settle the score.” The presenter established that the viewer was probably right and said, “ They came to power with blood, they will obviously only leave power by force.”

Let’s leave aside the content, which we may or may not agree with. The same applies to AKOS: it can have its own opinion and if it believes that the content has incited violence and hatred, it has every chance to file a denunciation against those involved. It is, however, worrying that AKOS, as a state body that is part of the executive branch of government, has taken on the role of prosecutor and judge and ordered the media outlet to withdraw part of a private TV programme. Let’s call it what it is: a typical case of censorship. This is censorship in the original sense of the word, when a state body, which is part of the executive branch of government, from a position of power, bans or confiscates a publication by a private publisher. And not only that. It is intimidation and a restriction on media freedom. To ban a publication or to order a media outlet to withdraw its content is a matter for the courts, which must first determine whether the content has indeed incited violence and hatred. In any case, this cannot be decided by a state official, that is to say, a politician. What AKOS has allowed itself to do is a brutal censorship attack by a state body not only on freedom of speech, but also on the private television Nova24TV and on the Constitution of the Republic of Slovenia.

We must also inform you that on the same day, strangers vandalised the same media outlet’s reporting car. We hope that the law enforcement authorities will take the damage to Nova24TV’s private property with the utmost seriousness, investigate the matter and find the perpetrators. And you can call the Minister of the Interior, Tatjana Bobnar, just as you called the Minister of the Interior, Aleš Hojs, a year ago. The damage to the property of a private conservative TV station by strangers is a direct consequence of the Prime Minister’s statements, that “dark forces” will be driven out. These words have clearly emboldened and emboldened the strangers.

Mrs Věra Jourová, you should look a little bit more into media freedom in Slovenia. If a state body is acting as a censor of content, that is certainly not freedom, in our humble opinion, but life under authoritarian rule.

Jože Biščak, President of the Slovenian Association of Patriotic Journalists and journalist 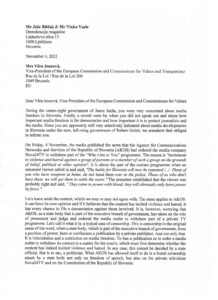 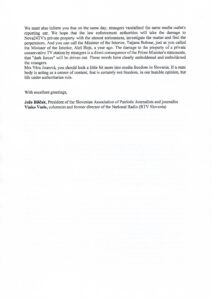